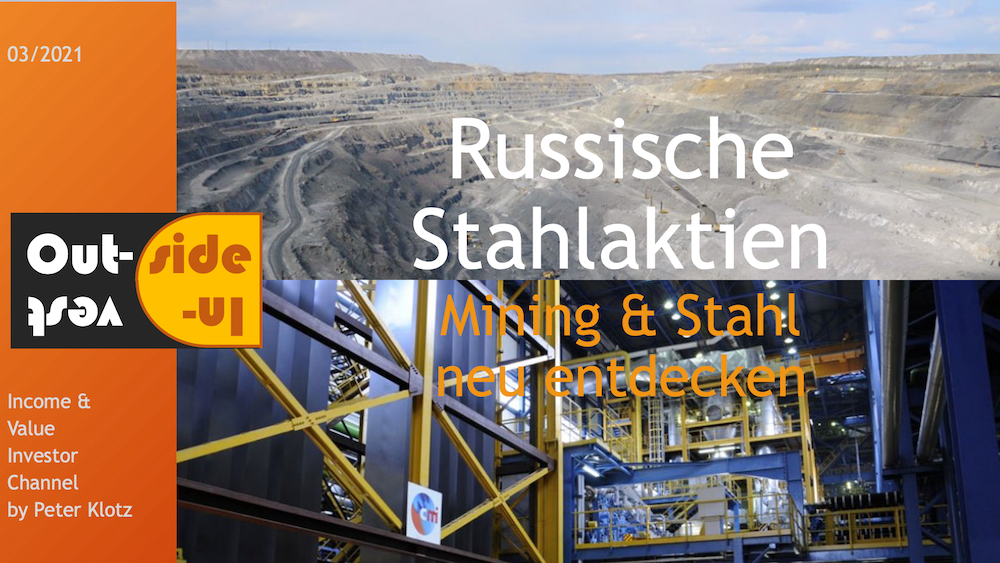 Thanks to a valuable user comment on the Youtube channel, I was made aware that there are more steel producers active in Russia, that are not listed on the MOEX, for example Evraz with a very interesting development.
Therefore I decided to loo a bit deeper into the segment of steel producers active in Russia in the series on the Russian stock market.

Based on the Wikipedia list of the globally largest steel producers, the following steel companies are active in Russia:

As we can see, that in addition to he companies we listed in the video on Russian commodities (Mechel and Severstal), we have also MMK and NLMK listed on the Moscow Exchange MOEX. EVRAZ and as a GDR also MMK and NLMK have a listing on the London Stock Exchange (LSE). Special is Metalloinvest with a Serbian ISIN, has bonds on LSE and MOEX but the equity does not seem to be tradable on either stock exchange.

All of these steel producers belong to some Russian oligarch: NLMK – Vladimir Lisin, EVRAZ – Vladimir Abramovich and Alexander Abramov, MMK – Victor Rashnikov, Severstal – Alexey Mordashov, Metalloinvest – Alisher Usmanov and Vladimir Skoch. Free float is more or less a quarter of the shares except for Mechel with 43%.

As usual all of the Russian steel producers are vertically integrated companies that combine mining and steel production and trading in one company for self sufficiency. All of them, with the exception of Metalloinvest, that does not mine coal, all others mine coal/coke and iron ore as resources for the steel production and sell their products by themselves.

Small differences exist though. NLMK and Metalloinvest trade the raw iron ore to other customers, while the other seem to consume the whole outcome for their own steel production. Metalloinvest has some of the largest iron ore reserves behind Value in the world. Evraz and Mechel also sell mined coal. Evraz is the mother company of the coal miner Raspadskaya, which we covered also in the video on Russian commodities. So better buy the mother and get two businesses with one.
Furthermore Evraz and Mechel focus on their own logistics, owning train wagons and Mechel even 3 harbours for shipping. Additionally Mechel has a power section with Mechel-Energo to produce energy for the own steel production.

All of the player have facilities in Russia itself, Evraz also has production capacity Kasachstan, Czech Republic, the US and Canada, NLMK has facilities in France, Denmark, Italy and the US.

The Russian market has two advantages for the steel producers, low cost for production and higher prices than the world market (premium). Therefore not all of the players, especially MMK are really focused on export, while other like Evraz and NLMK clearly are.

Already in the year 1960 there started a revolution in the US steel business initiated by Nucor by the introduction of mini mills in contrast to the established integrated mills in steel production. Whereas an integrated mill has to work with iron ore with a blast furnace that requires continuous operation of the facility, a mini mill can work with iron/steel scrap using a electric arc furnace (EAF) that can be shutdown and restarted depending on demand. This yields lower cost of production and a significantly improved flexible reaction to market demand. In this US this led to some spectacular defaults of e.g. Bethlehem Steel and other large integrated mills due to the cost advantage of the mini mills that conquered the market.

This is also an example of a disruptive technology that is ignored by those the currently dominate the market until it is too late and the new technology becomes mainstream with a cost advantage also the established market. With the consequence that the incumbents that early adopted the technology are taking over the market from the bottom.
This is one of the examples from Clayton M. Christensen in his book „The innovator’s dilemma“ (affiliate link, thanks), one of the fundamental books on innovation.

Now the interesting part! Only two of those Russian steel producers have introduced minimills, these are NLMK and Severstal. The others are „still“ operating integrated mills. Now 1960 is a hell of long time ago, so the interesting question is why did that not impact the Russian steel producers yet? Is it the vertical integration, such that the steel production has own mined iron ore and so an integrated mill makes more sense?
Or we are just a bit late in Russia with revolution (nice joke or?) at least in this space? Some indications point to this, e.g. there are smaller regional minimills e.g. Bratsk Steel Mill in construction in Siberia, maybe one of the incumbents that find their local market using cheap steel produced with cheap scrap and cheep renewable hydro power.
Just an idea to remember.

After having analysed the business itself and the important trends, lets get down to the numbers, the financials.

Finally looking at the price of the players:

Obviously there is EVRAZ and there is the rest, nearly a growth stock’s development and that in the steel business. My dear comment tip provider made a good pick.

Although all these companies look pretty similar with similar revenues, we found that they all have the specifics. Metalloinvest, that we cannot invest in. EVRAZ with its global diversification, NLMK with some diversification and with Severstal getting on the minimill development, Evraz and especially Mechel with their inclusion of logistics into the vertical integration. Export orientation or focus on the Russian market like MMK. So which one of these is the significant factor?

Mechel is unprofitable and loaded with debt, maybe later when there is a turnaround. MMK is a pure Russia/CIS play, which doesn’t have to be bad given the lowest debt of all. But it is in contrast to the others not nearly self-sufficient with iron ore, so not fully vertical and its presentation is a bit old-style in contrast with the others. According to some analysts MMK is also overwalued.
With Evraz and NLMK on the other hand one gets a modern globally diversified company. Evraz has this additional coal export (esp. to China) via Raspadskaya. Although the company has also lots of debt there are some growth prospects according to analysts. But price is already very high and it has the highest PE ratio from all players. Better to have it already in the portfolio.
Both Severstal and NLMK have minimills, which might be important. According to analysts both Evraz and NLMK are undervalued to their fair value, while Severstal would be fairly valued.
Severstal is also concentrating on Russia on the production side, having sold its US facilities in 2014 in order to cut cost and concentrate on the Russian/CIS market.
NLMK had obviously some insider sell, which is not a good sign necessarily though.

Clearly if you already own Evraz, congratulations, whether it would still be a good buy now, maybe but not value investor style anymore.
NLMK and Severstal could be considered to get on the watchlist. Not the highest price compared to Evraz and not really bad number either.