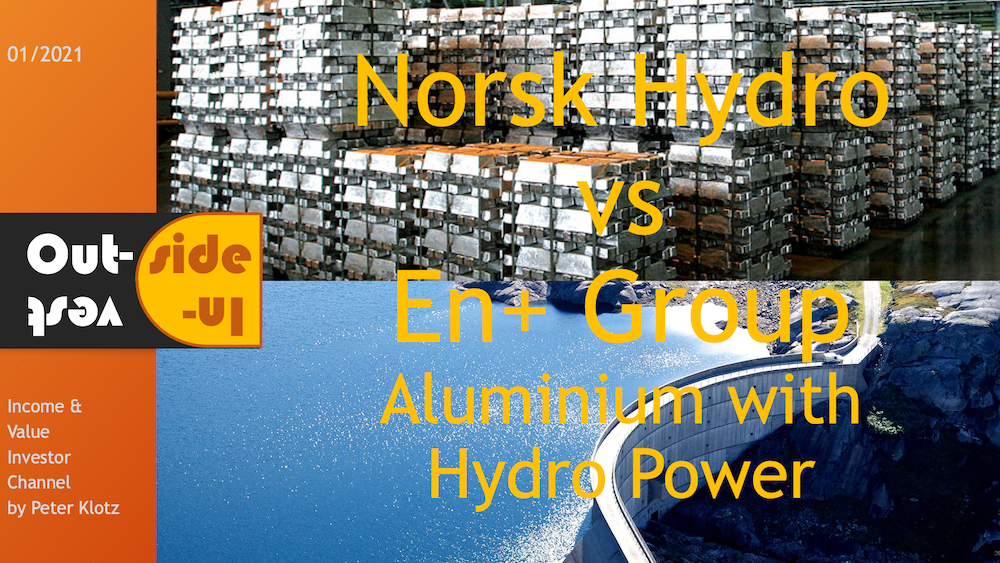 In my article on renewable energy in Russia, we said that En+ Group has the problem that you’re not only buying the hydro power business but also RUSAL, the aluminium business. So no pure renewable energy play.

But the aluminium business is interesting in itself as well, it is a commodity and a industry metal that is used in car and airospace manufacturing heavily. Even if there is a movement to replace aluminium by carbon fibre or other materials, there is still a large need for aluminium in the industry. Of course with the car manufacturing crisis a bit less than normal.

There are many aluminium producers and it is a cyclical market that moves with the economy as we saw last year. Plus the raw material, the mineral Bauxit, is not really precious or seldom and so there is no real moat for an aluminium manufacturer these days.

I would like to point to the video Aluminum Stock Analyses – Kaiser Aluminum, Alcoa, Norsk, CENX, ACH (POSITIVE FUNDAMENTAL TREND) from Sven Carlin, where he analyzed several US and Chinese Alu producers and found that only two of those are interesting for a value investor, Norsk Hydro and Kaiser Aluminium.
Kaiser Alu is interesting because it has a good running speciality business and Norsk Hydro because it is not only an Aluminium producer but also an energy producer.

And that is exactly where I want to start, why is it so interesting to combine Aluminium production with an energy sector? Right, because the process to produce Aluminium is very energy intensive, so it is a major advantage to be able to produce lots of cheap energy yourself as a company!

This is a major differentiator to normal Aluminium producers that have to buy their energy on the market, even if the state tries to support this with low energy taxes for those industries in their own country.

But there is another play on the world Aluminium market, that has the same properties, an Aluminium sector and an energy sector and that is the En+ Group in Russia, that we covered in two of the recent videos already.
Remarkably both Norsk Hydro and En+ Group have a similar structure and both are using hydro power to produce their own energy and sell this energy on the market. That is why we want to have a closer look at these two companies, one from Norway, the other from Russia.

Norsk Hydro ASA is a Norwegian company that is traded at the Oslo Børs (now part of Euronext) with the ticker NHY, ISIN NO0005052605 in Norwegian Krones (NOK). Internationally the ticker is NOH1.
The shareholder structure is 34% the Norwegian state, some institutional investors and a dominant part free float.

Norsk Hydro has reduced cost and capital expenditure in 2020 as reaction to the crisis and has a program to improve its earnings further. The company is moving into solar energy, strengthening Aluminium recylcing and going into the battery business.

Norsk Hydro has 3 facilities in Norway currently but has a plan to build a new renewable energy business based on its capabilities.

They expect a rebounding demand in 2021 for their products after negative development in 2020. Last year, earnings per share had been negative due to this but net debt could still be reduced.
Additionally to the financial problems there had also been restructurings in both Norway and South America to be handled. And that after the 2019 cyber attack where the ransomware LockerGoga had brought down operations, costing some 75 Mio USD despite the public disclosure of the case by the company. Therefore since today, Norsk Hydro is not profitable but analysts expect it to return to profitability in the next 3 years.
A dividend is payed with a yield of 3.7% but the dividend is not well covered by the earnings obviously. Analysts see growth potential but slower growth than the market. Debt has increased but is much better than En+ Group.

We have covered En+ Group PJSC already in the article and video on Russian Utility Stocks (Youtube). En+ Group has RUSAL as subsidiary for the Aluminium business and EurSibEnergo for the energy sector.
En+ Group, as well as RUSAL, are traded on the MOEX, the Moscow Stock Exchange with the ticker ENPG, ISIN RU000A100K72 in Rubles (RUB) as well as on the LSE, London Stock Exchange, as GDR in USD (not GBP!).

In 2020 there had been a share holder structure change with VTB (second largest Russian bank) taking over a part of the shares from the En+ Group as well as Oleg Deripaska. Probably this is a workaround for the implications of the US sanctions.

So, how does the business of En+ Group look like? The group is a vertically integrated aluminium producer with Bauxite mining, aluminium smelters, sales and a utilities sector with hydro and conventional power plants. The aluminium plants and power plants are mostly in Russia, mining is world-wide.

In the following graphic one can see the position of En+ Group regarding aluminium and hydro-power. But also Norsk Hydro can be found in the chart

En+ has 5 HPP (hydro power plants) near their aluminium smelters and as one can see, the hydro power is almost completely consumed by the own plants and only a smaller part can be sold to the market. In that sense En+ is not a large player on the market in comparison with RusHydro, although capacity is even higher.

We had the assumption at the beginning, that own hydro power should be a huge advantage to an aluminium producer regarding energy cost. This is the facts regarding cost and EBITDA:

Let’s look at debt, especially knowing that RUSAL had major problems in the past. Revenue and profit but also CapEx spending were going down a bit in 2020 while debt has increased even more.

What is concerning is that in the aluminium sector debt is mostly in USD, which is usually bad if it is not in the own currency. And the debt/equity ratio is over 250%, although it is improving.

So the last question is of course, is there an investment case for a value and income investor in one of these companies?
First regarding investment rules. Aluminium product is not really an environmentally friendly business and if using coal as an energy source would be a no-go for me. Now with the usage of renewable hydro energy this is more acceptable, in the end we all need Aluminium. So rather than letting the Chinese burn coal for this we rather invest in producers like Norsk Hydro and En+ Group/RUSAL.

Next check is the business and the value that is in it. Aluminium is a basic material used in many applications. In aerospace, a large user, there is though a trend to replace classic aluminium parts by carbon fiber materials. Further automotive business, the next large consumer is down but also EVs will require Alu.
The business is cyclical but rather stable, Alu will still be needed, it is not like coal. The main danger is political regulation regarding energy consumption and that exactly where the hydro power approach protects against to a certain extend.
Will it exceptionally profitable and growing strongly? Probably not. Could it be a interesting addition to a portfolio, probably yes, especially if they turn their renewable energy business into more than just a source for in-house energy.

Let’s look at the last point, can we buy it at a discount? First Norsk Hydro shows a rather high valuation already:

Maybe it’s a good candidate for the watch list. The company has though some interesting plans towards solar energy and making its energy business, incl. solar, into an own business, that could really be interesting. Also they are growing their battery business. Maybe this is already priced in?

While Norsk Hydro reduced debt but made losses in operations, En+ group had profits but increased debt. Definitively different handling of the crisis. Potentially Norsk Hydro is a turnaround candidate?

En+ Group has a clearly lower valuation, coming from a high past on the other side:

So here might be an opportunity, or? The only real issue is the debt. As Norsk Hydro, En+ also invests in new renewable energy business, as we discussed in the utilities video, e.g. solar plants. Both need to be watched and could be interesting.

What is interesting is, that the investor presentations of En+ is IMHO better than that of Norsk Hydro, which focuses less on financial and operational results than on sustainability. This is also a big topic for En+ but the information an investor is looking for is exceptionally professional. And that is a Russian company! For Norsk Hydro you will find more analysts, but not many either, that cover the stock.