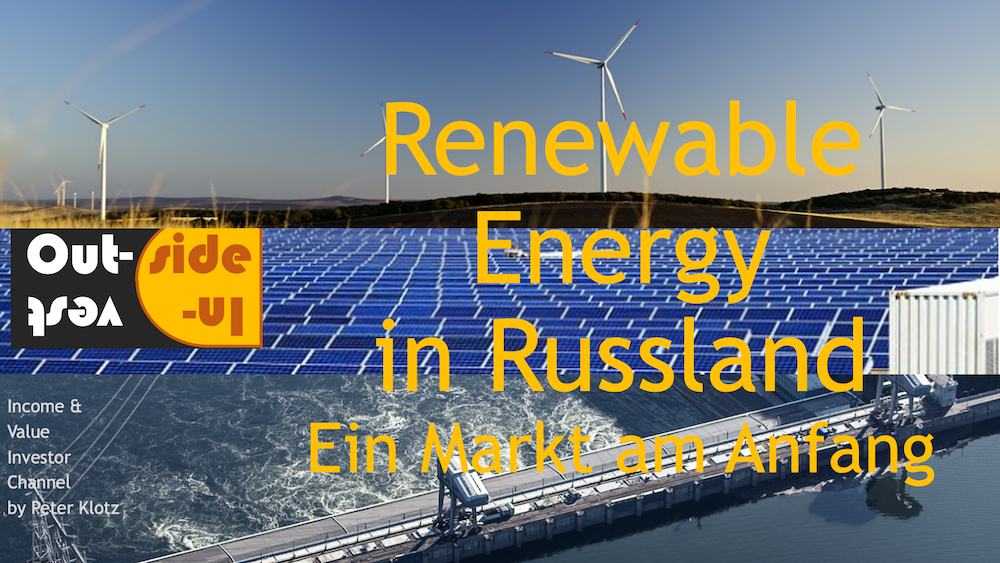 The Russian utility companies use mainly gas, coal and nuclear energy for their generation, except for a substantial part of hydro power since the 1960s. In the rest of the world there is a strong movement to renewable energies as an energy source, so what is happening in this area in Russia? That is what we want to investigate in this video and have a look at the player in the renewable energy market with focus on two stocks in detail, which are RusHydro and Enel Russia.

But in the field of hydro power Russia is number 6 world wide regarding production volume:

And when looking at the additional capacity that is taken in operation, we can see that Russia is still putting significant new power plants into service, in contrast to most western countries.

When we have a look at the windmap, we can see that clearly there are many regions that have significant potential for wind energy, other maps show that even more clearly:

The installed capacity of WPP (wind power plants) is raising but is insignificant in relation to the leading nations such as China.

We usually think that Russia is a northern country with the large Siberia with its tundra and taiga and definitively do not think as this country being especially interesting for solar power plants (SPP).
But the solar map of Russia shows that there are huge areas in the south that are very suited for SPPs:

The installed capacity of solar plants is similar then the wind parks raising since 2016:

In each of the energy sources there are different players active in the market:

RusHydro is the dominant player in the hydro power segment but also has first wind part and solar installations and new projects in plan. The second private company that operates HPP is the En+ group power segment.

In the wind park segment, apart form RusHydro there is to name Enel Russia, the Russian subsidiary of the Italian Enel S.p.A. Further Rosatom, Russia’s nuclear power giant has a segment that builds and operates wind park installations. The last player is the russian segment Fortum, a large Finish utility company.

En+ group also has solar power plants like RusHydro and Fortum. The additional player is Solar Systems, that is not listed on the MOEX like Fortum Russia and belongs to Harbin Electric, a Chinese company that has a bad reputation due to fraud and and other scandals.

The different companies have their installations in the different regions of Russia, Wind mostly in the south and far east, hydro power in Siberia:

We have left out the HPPs of RusHydro for a separate map, because there are so many spread over whole Russia:

RusHydro also shows the risks of operating HPPs as can be read on Wikipedia with its Sayano-Shushenskaya incident in 2009, that cost many people’s life and destroyed the dam installations in a way that repair took until 2014. Correspondingly huge costs were necessary to put the dam back into operations and the share price dropped by 11,4%.

As according to my energy rules Rosatom and unfortunately also Fortum are in the business of nuclear power plants, we will not look at them. Also I will skip En+ group because one cannot separately invest into the power segment without also buying RUSAL, the aluminium business of the group. Therefore we will in the following have a more detailed look at RusHydro and Enel Russia.

RusHydro (ticker MCX:HYDR, ISIN RU000A0JPKH7, internaltionaly e.g. on seeking alpha ticker RSHYY) is 61% in possession of the Russian Federation, 13% by VTB bank and a bit less than 20% free float besides institutional investors. RusHydro has a sponsored ADR on the London Stock Exchange (LSE) with the ticker HYDR.

With 439.288.905.849 common shares RusHydro has a market capitalisation of around 343 Mrd RUB. The company is in the major Russian indexes, such as RTSI, IMOEX and the sector-specific MOEXEU and RTSEU among others.
Face value is 1 RUB and one has to buy in 1000 piece tranches as with many Russian stocks.

With a PE of around 12 RusHydro has a dividend yield of 5% or more, dividend is currently 0,04 RUB per share. The company has a dividend policy to distribute at least 50% of net income or minimum the average of the last 3 years. So we can expect to also get the same amount in 2020.

Numbers from the last financial report Q3/2020 look very good, production, earnings and profit were increasing. The debt of about 1/3 of the assets seems ok for this kind of CapEx intensive business and given the incident history of its HPPs.

The only caveat is that the valuation of RusHydro is not cheap at the moment. As we can see it has already compensated well the losses during the 2020 COVID-19 crisis and that is not a given for Russian energy stocks.

Although when we compare the stock with a comparable stock in the western world, let’s take for example Brookfield Energy Partners (BEP), we can see that this has the price development of a growth stock:

BEP has a comparable number of power plants but of course diversified internationally and more revenue. But of course a price of currently around 47 USD is much more than the 0,79 RUB and the dividend yield with 2,5% is also not comparable really.

Enel Russia (MCX:ENRU, ISIN RU000A0F5UN3, internationally ENLAY), the Russian subsidiary of Enel S.p.A, is the much smaller private kid on the block. Enel Russia has a ADR in the US with ticker ELOKY.
Ownership structure is 56% Enel S.p.A, institutional investors and a bit of 30% free float. Face value also 1 RUB and lot size 1000. With 35.371.898.370 common shares ENRU has an market capitalisation of around 32 Mrd. RUB and is also present in the indexes RTSI, IMOEX, MOEXEU and RTSEU.

With a dividend of 0,085 RUB per share ENRU has a PE factor of 5,6 approximately and a dividend yield of 8,87%, which is very attractive. And if we look at the last number from Q3/2020 we see across the board a negative development with decreasing income and revenue and increasing debt:

Why is this? Well Enel Russia has a bold strategic plan in place to divest from conventional energy and concentrate fully on renewable energy sources. That is why the company has sold in 2019/2020 its only but very large coal-fueld CPP, as we can see in the production numbers:

That of course means significantly less income that will only in the long-term be compensated by the first income from the wind park installations that are being build at the moment and in the future. Accordingly the valuation of Enel Russia is still at the bottom after the crisis:

Although there was, unfortunately for the investor, a upward movement in the beginning of 2021 due to the general market trend also in Russia.

So after all this analysis, the question is, first is there an investment case in this market overall and second in one of these two companies especially for an income and value investor?

In general the market of renewable energy utilities in Russia is clearly under-developped and catching up, maybe slowly but significantly. It is like looking a the early stage of the renewable energy market in other parts of world, isn’t it? And that brings us to an interesting strategy or idea regarding investment? Somehow like the Microsoft strategy, if you missed a market trend you watch it and see that it works and finally you decide late but with force and determination to nevertheless enter the market. So here I see such a part of the overall market of in renewable energies that has the potential for significant growth and those companies that invest in that market will benefit from it, probably.

We have in this article and video identified these players and saw that there are even very low valuated opportunities present with ENRU, that when the strategic plan works, could be a value investors prey, couldn’t it? The strategy is bold but risky and obviously the market is pricing in this uncertainty as not so sure. If you believe the plan could work, then there is an opportunity. An alternative could be to look at the mother company, Enel S.p.A (ISIN IT0003128367)., which has the same basic strategy but a much wider worldwide diversification. Of course that comes with a PE of 21 and a dividend yield of around 4,1% only. But even here there could be further growth, as even in the rest of the world, the renewable energy revolution has just begun.

Let me know your opinion on the subject and I hope you enjoyed the analysis, if so, please like the video on Youtube!