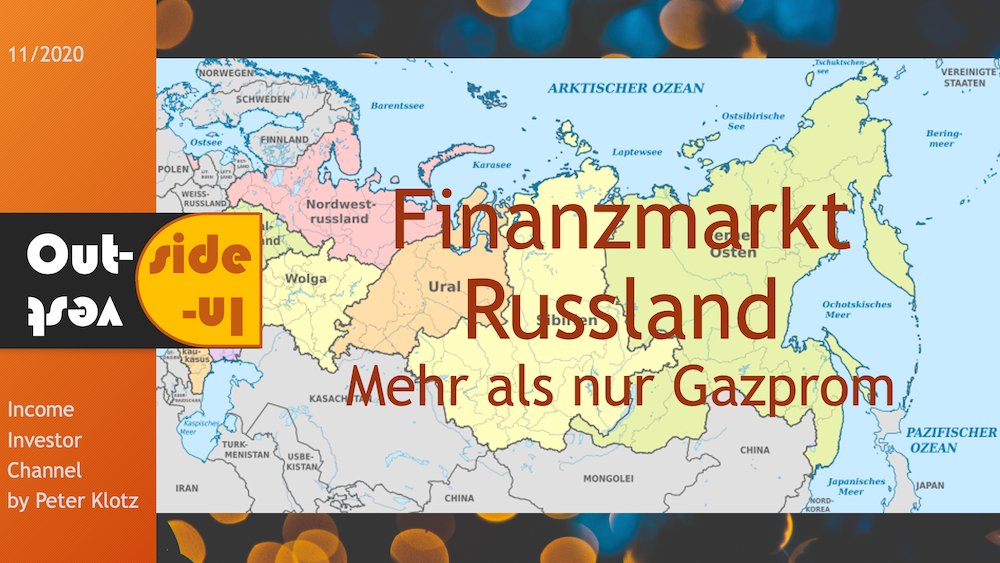 Just because I write about Russia does not imply that I sympathise with the Russian political system, in the contrary. This article is about the stock market and not about politics.

Nevertheless, wanting to start a market analysis, the Russian market is a good candidate to start. It is not too large, like e.g. the US market, but also not too small, like say Kazakhstan. So a good target for my first analysis about a whole market in an effort to approach the topic of stock analysis.

Russia is the largest country on this earth, a ex-super power and still an emerging market officially. As a stock market it is a very new market compared to the long history of the United States. Only after the country has converted to free market economy and matured a got a financial market that is worth looking at.

Probably it is one of the more developed emerging markets and therefore all but not interesting.

Russia has basically one stock exchange, which is the Moscow Stock Exchange or MOEX (Моско́вская би́ржа), which has formed as a merger between the Moscow Interbank Currency Exchange (MICEX) and the Russian Trading System (RTS) in 2011.

Companies are grouped in levels 1 to 3 at the MOEX, where level 1 are the largest according market capitalisation but also liquidity. The criteria can be found on the MOEX web page. While level 3 contains smaller and less known companies. We shall look at all levels.

MOEX hosts a couple of indexes, especially interesting are of course the equity indexes. The most important are the RTS Index (RTSI – Индекс РТС) and the MOEX Russia Index (IMOEX – Индекс МосБиржи). In America also the MOEX 10 index seems to be popular, which contains the 10 most liquid values from the IMOEX.

Both indexes are composed of 42 values and are price indexes, but the difference is, that RTSI is published in USD and IMOEX in RUB. RTSI market capitalization is more than 177 Mio USD and the IMOEX a bit less than 14 billion RUB.

So how did the Russian indexes perform, not just in the last, but in the last 5 years? Especially compared with S&P 500 or the DAX.

Added to one picture, one can see that the RTSI can easily compare to the S&P 500, that as we know went super well. On the other hand the DAX had only a sidewards movement and underperformed significantly.

The other fact that one can see is that the recovery, that the S&P showed, are not visible in the Russian market. The reason is probably that there are not as many high-tech stock in the Russian stock market as there are in the US market and these brought the overperformance.

Next there is the Общество с ограниченной ответственностью (ООО) or a limited company (like LLC/GmbH) depending on country. See also Wikipedia.

When looking at the export statistics of Russia, it is obvious that the largest amount of goods exported is oil and gas to the extend of more than 50%. See OEC.world. The rest are commodities like aluminium, iron core or wheat.
Thus we conclude, that the focus of the Russian stock market is really

The next special fact is that a lot of companies have a high share that is owned by the state directly or indirectly, e.g. via Rosneftgaz. A good example are companies like Gazprom or Rosneft.

What is also visible here, is that almost all larger Russian companies have a program for sponsored American Depository Receipts (ADR). As discussed in my video about single versus collective investments ADRs are a indirection and although pretty common, should be avoided and the original stock be bought.

Other companies are controlled by Russian oligarchs, which might be positive if these are in good contact with the current president or bad if they are in litigations. But having a large share of state or state-near oligarch ownership is not necessary a negative aspect. The Russian state also depends on dividend payments, especially Gazprom. As a private investor one can thus participate in the success of the state in a modest amount of course.

Other characteristics of Russian large caps are often a high dividend yield and a very low price/earning (P/E) ratio, but without being in business trouble. Many larger Russian companies are very good diversified in itself because they have activities spread over all of Russia, including Siberia and the far east. So buying a Russian stock in energy, utilities or commodities is often much better diversified than investing in a single Canadian mining company. Also many Russian energy and utility companies are vertically integrated and involved in exploration, production, transport, refining and marketing of energy.

I have to be careful with the last point as this requires the evaluation of each investment case in detail. But when I look at the assets that the Russian companies in these interesting sectors have, then they are really worth something. Of course we know that poor management can reduce the value of the hard assets a company possesses and cost for maintenance can also be significant. But nevertheless it feels like compared with US or European companies of the same kind, this market contains undervalued stocks that could be worth investing in.

In the following videos I will continue my market analysis with specific videos on the different sectors outlined here.