Polymetal Int. – not only Gold that shines 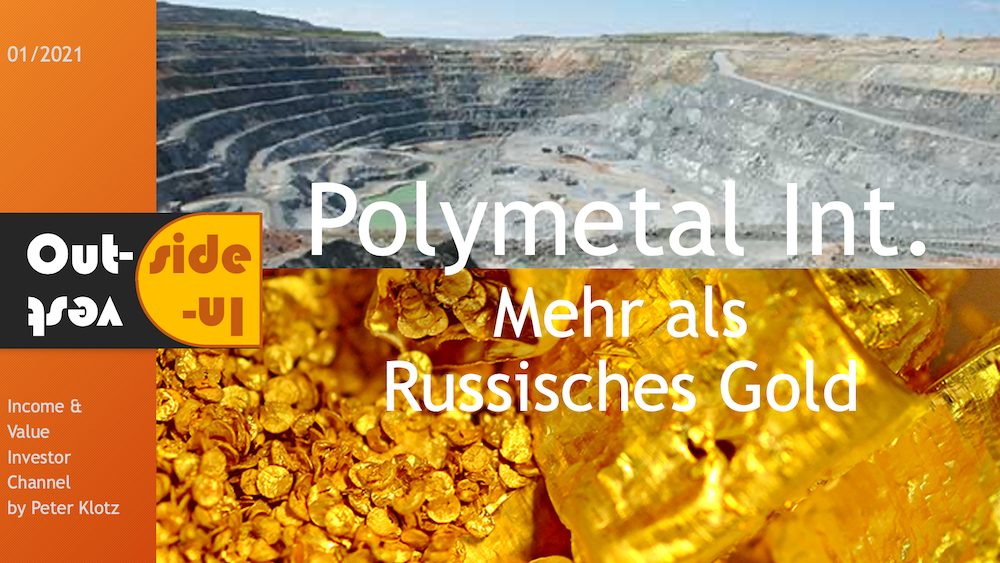 In the video on Russian commodities we have also covered the Gold and industry metals stocks on the Russian market, among them

All of them mine for gold (Au) and of course also silver (Ag) as by-product but only Polymetal is more widely diversified and mines also for copper (Cu) and platinum (Pt) and palladium (Pd) metals. As such it is also an alternative to the over-priced Norilsk Nickel (Nornickel) that also has Palladium metals in its portfolio in addition to Nickel.

Russia is on position 2 of the world-wide gold production behind China and has changed position with Australia in 2019.

While China’s gold production is declining, Russia is increasing production

There are many more companies active in the Russian gold mining space, quite a few of them not Russian companies but located in the UK but with Russian operating companies, such as Kinross form Canada, Trans-Siberian Gold, Nord Gold and Highland Gold. Pure Russian players are UGC, Pavlik Gold and GV Gold.

Polyus is number one followed by Polymetal. The others are significantly smaller, at least in production and earnings but not in price (see below).

How is gold production setup in general in Russia? Compared to other countries the ore grade is a bit worse, which could impact refinement cost but still Russian gold producer have very competitive production cost ($ per oz). There are many predicted reserves a increasing production and new exploration projects. Russian gold mines are spread over whole of Russia and mines are being modernised, which is also necessary as infrastructure is difficult. Clearly the mines are often in areas with low population, so energy lines and transports produce higher equipment cost in this vast country. Nevertheless the companies covered here put strong emphasis on sustainability, environment and social responsibility also in Russia.

Polymetal International PLC, ticker POLY, ISIN JE00B6T5S470 is listed at the MOEX (level 1), the London Stock Exchange (LSE) and the Astana International Exchange of Kasachstan (AIX). The stock is part of the FTSE 100 and the MSCI as well as IMOEX and RTSI indexes.
It is a vertically integrated and diversified mining company with operations in Russia and Kasachstan.
The company has the head quarter in Limasol, Cyprus and the stock has a Jersey channel island ISIN. „Honi soit qui mal y pense“ French for „shamed be whoever thinks bad of it“, obviously for tax reasons but for the investor a quite good choice as this circumvents the LSE stamp duty reserve tax (SDRT).
Petropavlovsk, by the way is also an Incorporation with a British ISIN, only Polyus is a classical Russian PJSC.

Anyway in the last video we looked at the liquidity of this stock at both the MOEX and the LSE and found out that it is probably favourable to acquire this title at the LSE in GBX (pence) rather than in Ruble (RUB) at the MOEX.
There is also an ADR in USD traded OTC on the NYSE.

As of 2020, apart from ICT Group with 24% and some management investment, the shareholder structure has a large 71% free float, which is great.

Polymetal is the second largest Russian gold miner (Polyus is the first, Petropavlovsk number 3) and has 9 operations and 13 mining sites across whole Russia with a strong focus on the Far East. Some sites are pure gold or silver mines, hubs for processing and transportation to nearby ports. There are several development projects for platinum, gold and silver. Overall a well diversified setting.

Polyus has more gold ore reserves than Polymetal when looking at the tables, but with Polymetal you also have silver, which might be even more interesting in the commodities cycle to come. Also the grade of the ore is higher for Polymetal.

From a value investors perspective Polyus and Petropavlovsk have clearly followed the valuation boom of other pure gold miners in the western world and are not cheap anymore.

The interesting question is why? Is it the fact that it is not a pure gold miner or that it has less reserves than the others that leads to this lower valuation by the market?

Production and revenue increased in 2020, so did CapEx spending but also free cash flow. The dividend policy calls for distribution of 50% of net income and ok. Polyus is better in this chart but maybe based on an older valuation while other like Petropavlovsk don’t pay one at all. 4% is not great but not bad either in the current Gold boom.

Numbers look generally promising with free cashflow rising and debt a bit low than 2019. But the decrease of the factor net debt/adjusted EBITDA from 1.4 to 1.3 is not as large as the 0.7 of Polyus, which had a lot more debt than Polymetal in the past and achieved to reduce it a lot more. So debt remains a bit of a concern, even if a asset to liability ratio of around 1.6 sound ok.

What I like with Polymetal is the good diversification in Russia, new exploration projects, low production cost and the high free float of the stock. The most important aspect is though that Polymetal does not just product gold but also silver, platin and palladium metals and therefore is not completely dependent on the gold price. Even when this is only one mining operation, especially its role as Russia’s largest silver miner could get interesting when the gold/silver ratio improves to the silver side.

The burning question is, why does Mr. Market valuate Polymetall lower, percentage-wise than Polyus or the smaller Petropavlovsk or Seligdar? Is there some hidden problem or is it the higher income and cashflow of Polyus? The other two might benefit from the small-caps factor but Polyus is larger in production. Or is it the fact that it is not a pure gold miner, which would be an advantage in my eyes, though?

At least it seems that Polymetal could be an interesting candidate for a value investor to enter the gold market at a late stage to profit from the gold and silver resource cycle that is expected to come. Everyone should make its own judgement of course.